As a psychic I wonder if you have more paranormal experiences because your more tuned-in and open to them or if you think you have less because it’s just a part of your everyday life.

Question: Is Paranormal Activity Apart Of Your Everyday Life?

Thought my life I’ve had period of enhanced psychic experiences that would be considered paranormal in the way that I would experience unexplained inner sight and vision that I would ignore, it would go away and then come back again until I finally embraced it and started exploring my calling as a lightworker.

I grew up in an old house that once was an adult foster care home that took in all the mental patients after the Traverse City, MI State Hospital AKA asylum was closed down. As a young child I had all these elderly people around me that for various reasons were mentally all over the place. One by one they died in my childhood home and eventually my parents not wanting to keep exposing me to their behavior and quirks stopped taking-in anymore elderly adults and switched business plans.

Being an intuitive child and much more clairvoyant or having clear seeing at the time I often felt and saw a lot of strange people in the house as well as shadow figures and colorful human auras. At night my toys would always go off and my mom and I would get out of bed and try to find the culprit. She never believed me when I reported what I saw and typically replied “you just need more sleep”; she may have been right because for many years I slept in her bed, holding her hair at night out of fear.

Resulted in paranormal activity that was more aggressive, in my face and scary because at the time I had no understanding of the paranormal or spirits; growing up with Christian conditioning I simply understood heaven, hell, angels and demons. 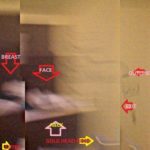 I’m fairly certain that this photo of my room (not how it looks, should show yellow wall paint and wood dressers) shows some kind of creature holding open a portal and that the second being is shape shifting or dematerializing and going through it.

I had a rocking chair that would sway back and fourth

My light would always flicker

I would also see apparitions and have inner vision and hearing and really felt that I was paranoid and going crazy.

One night I felt two hands grab my feet at the end of the bed, I started kicking, ran downstairs and slept with my mom again for many months.

During My Adult Years…

A straw in an empty cup start circling the rim

A razor fly off the shelf and out of the shower

I heard a scream that no one else did

Then, after doing some amateur paranormal research (I got a lot of really great photos) at someone’s house I went home and got into bed and felt a small targeted spot above my left knee get very cold and then very hot – it kept burning and when I looked I had three unexplained red scratch marks.

Now that I have an understanding I am no longer fearful of the unknown but it would have been helpful to have a parent that pretended to believe me or didn’t dismiss what I was saying because for years I’m sure they thought I was as crazy as I felt I was.

To this day I sometimes feel that supernatural chill, my light will turn on and off in the middle of the night, I will feel something touch me or hear sounds like rattling keys manifest but, when I feel scared or my son wakes me up and asks who the dead body at the end of my bed is I know to call my spirit guides forward and surround the room in a white light of protection.