Everything Suit Of Wands In The Tarot 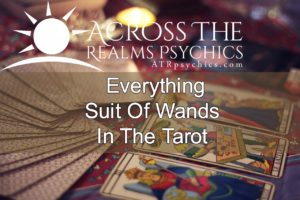 The tarot deck is comprised of 56 suit cards called the Minor Arcana and 22 cards called The Major Arcana. The Suit of Wands in the Tarot deck is also called rods, batons, staffs, or clubs depending on the deck. The element that the Wands is represented by is Fire. Its direction is South and Season is Spring and sometimes Summer. The colors are Primarily Reds to Yellow. Of the four humors it is represented by yellow bile and the Jungian sense of intuition.

The wands are usually depicted with fiery objects  that adorn the pictures of the tarot deck suit. In general the Suit of wands represent ; virility, growth, enterprise, creativity, self development, inspiration, energy, clear perception, enlightenment, passion and desire. It is a card that mirrors what is important to one’s inner self. In our daily lives this card represents our career path.

Like a fire burning and the fire element; wands indicate all the things you do during the course of a day to keep you busy. This suit encompasses working both outside and in the home. When we see wands in a spread it is telling us that there is ideas, growth and expansion around the situation. Wands represent our original thoughts. Thoughts start as seeds that grow and flourish if we tend to them the right ways. Many wands in a reading mean that the conditions that the querent finds themselves in are always conceived as a thought first and then developed into an idea.

Wands represent future orientated energy that is both active and inventive. When we see wands in a reading it tells us about the possibilities and movement of a situation. Of course the Wands have both a positive and negative side to them. When in reverse or a spread that has negative implications; Wands can mean the scorching side of fire. That means restlessness, anger, violence, pride, mischief, disruption and unwillingness as starters depending on the spread.

In general terms wands represent career, enterprise and work. They also mean the beginning of identifying and starting a new course in one’s life. This can take the form of self development and accomplishment.

Physically the characteristics of people the Wands are associated with  usually fair skinned. Their hair tends to be either blond, red or light brown. Their eyes are usually blue, green or light in color. The astrological signs that correspond to wands are fire signs. They are Aries, Leo and Sagittarius.