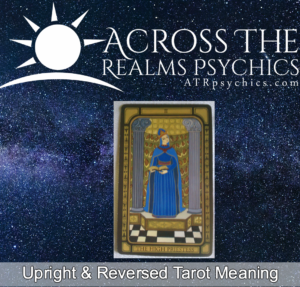 The High Priestess is the symbol of spiritual enlightenment. She sits between a palm and pomegranate tree which are symbols of male and female energy. Her crown has the full moon and she represents every virgin goddess.

Along with spiritual enlightenment she also represents inner illumination and the link between that which is seen and unseen. She is the feminine form of balance and power. When she shows up in a spread she is telling us to use our intuition or that we have good intuition. The High Priestess also represents the unconscious mind and inner voice we have trying to give us a message. It is said when she appears hidden knowledge or information will be revealed or there is such information that is hidden that needs to come to the light. She represents unrevealed truth and hidden influences at work.

In the reverse position the High Priestess means obvious knowledge and facts. It means any decisions you make will be based on facts and logic rather than intuition. It can indicate in this position the lack of balance and harmony due to insufficient foresight. It also indicates that the feminine or intuitive side of a person’s personality may be repressed. If it’s reversed in a woman’s spread, they have a problem coming to terms with another woman or themselves. It also means surface knowledge and or repression or ignorance of true facts and feelings. Sometimes it indicates being self centered and sensual pleasures depending what’s next to it in a spread. Reversed it can also mean things and circumstances are not what they seem.