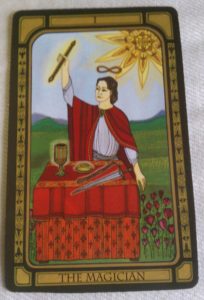 The number one is the number of creation and individuality. This is what “The Magician” is about; the power to transform through the use of his will. He takes the nothing like the Zero of the Fool and transforms it into the number one. He is the conduit of a higher power. The Magician is also an illusionist. Like all illusionists he can create an illusion of reality by the use of the sleight of hand and tricks. He is only confident in the skills he has in order to bring forth the results he wants. His real power comes from those sources outside of himself, just like in a magic show there are people behind the scenes to make it happen. Without the sources he too is powerless.

When the Magician pops up it is warning about opportunity that we can have as long as we pull all the aspects in our life together to make it happen. It tells us the more prepared we are for the change the better it will be. It talks about the person mastering the material world. It’s done through being organized, using creative action, self discipline, and a willingness to take risks.

This person has the gift of speech and to sway people. He or she has to recognize their potential and have the power to initiate things. They are witty and have very good communication abilities. This person can achieve anything they set out to do.

When the magician appears reversed this person is a bit of a perfectionist. They may appear outwardly to be able to handle any situation because they seem cool and calm; but inside they are indecisive and unprepared. They can use their gift of gab to manipulate and take advantage of people. It also indicates someone who abuses their power and uses it for negative purposes.

The magician reversed indicates someone who is confused and unorganized. They do not make decisive choices. They like to hesitate rather than choose. They are unable to properly utilize their time and talents. People who are represented by this card in this position are lacking inspiration and energy. They give up easily, have a poor self image and have poor coordination; and sometimes learning difficulties.