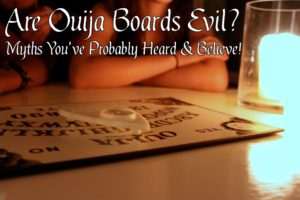 Lots of people today will let you know that Ouija boards are bad, evil, the devils play thing, responsible for bringing demons through and into the earthly plane.

But Is That Actually True?

The Ouija board was initially patented in 1891 as a form of amusement – a game. Actually, it was even tested in the Patent Office to ensure that it worked as asserted. Most everyone of my generation played with Ouija boards as kids, including myself (and I don’t recall any devils showing up!). However, the film The Exorcist altered all that. Not only was everyone that watched the film rumored to die 7 years later, the reputation of the Ouija board was forever damaged.

Let’s Research The Common Myths About This Once Popular Game:

Ouija boards release or summon demonic or negative things. Millions of Ouija Boards are sold without a single confirmed case of demonic possession, since 1891. Several individuals have claimed that the Ouija board told them what to do, including a female in Chicago, Illinois, that left her mom’s body in the living room for 15 days before she went to bury it; then there was two girls in Buffalo, New York, that perpetrated murder in 1930. Neither claim supplied evidence of demonic activity.

The exception I’d make is that if your goal is to summon or release negative or demonic entities, then you certainly might actually achieve success in doing so (not that that’s a great thing). Every case I’ve seen where such entities are present was not an effect of using a [easyazon_link identifier=”B00EFDXAB4″ locale=”US” tag=”atr021-20″]Ouija board[/easyazon_link], but because they’ve participated in voodoo, black magic, or alternative practices that were dark.

You’re speaking to spirits. The way a Ouija board works is the fact that it uses non-conscious reflexive motions, known as the ideomotor effect, of the people who are utilizing it to direct the planchette around the board. To date, there’s no hard evidence that spirit has anything to do with communicating the information received through a Ouija board and because we are able to access ALL information – until we have that evidence, we won’t know exactly who or what we’re connecting with.

One questionable practice that occurred in 1920, much to the dismay of the authorities, was the utilization of Ouija boards to attempt to find new clues to help solve a homicide in New York City. In 2012, researchers found that issues using Ouija boards could raise their capability to answer questions to 65%, from random chance of 50%. They reasoned that our non-conscious minds are more intelligent than our conscious minds, most likely because we tend to trust external sources (even a Ouija board) more than ourselves.

They are fundamentally bad. Because of the myth, some believe that using a Ouija board is communicating with spirits, which they believe is a sin. I’m no expert on the Bible or on each faith and its own belief system, however, I’ve read or heard of countless examples of people communicating with beings not on the world in human form in the Bible or from spiritual representatives (priests, preachers, etc.). I’ve not, on the other hand, read or heard anything special about Ouija boards being evil in and of themselves. Surely, no one would support you to do something that’s against your belief system, however, there isn’t any definitive signs that Ouija boards are bad. In the U.S., Ouija boards are still sold in toy stores in both the glow in the dark and pink-is-for-girls variations. On this particular myth, you’ll have to determine for yourself!

Using recording devices, pendulums is substantially safer. Truth be told, there is no difference between some of these spirit communication devices. All are used today for “spirit communicating.” The main difference is the ease with which you get information from more modern devices, versus spelling each word out, letter by letter. While quite several paranormal investigators still use Ouija boards, most have graduated to recording apparatus, so that they might receive more prompt and “scientifically-established” answers from spirit. Still, these new devices never have yet been shown to be genuine spirits communicating with us; maybe that proof will come in time.

Regrettably, the Ouija board was vilified in popular culture, thanks to T.V. and pictures. Despite this undeserved poor reputation, it is still used now as a tool for spirit communication. I have definitely used both a Ouija board and pendulum without any trouble but, I do protect myself with a white light of protection. Of course, anything can be utilized for the incorrect purposes or with bad intention. If a person is purposely trying to conjure entities that are negative, then that’s a different scenario entirely and one to be avoided!

Have You Used A Ouija Board Or Spirit Box?

Want To Hear Stories Of People Who Have?