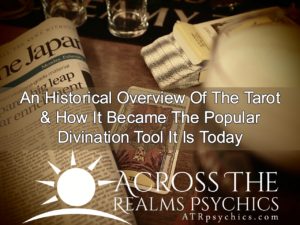 When we think of tarot cards we think of the occult, mysticism and divination. Well the truth of the matter is that the original tarot cards were actually used to play games with. The basic rules for playing the tarot games appear in a Italian manuscript of Martiano da Tortona dating back to 1425 with the Italian wealthy classes.  It is a fact that the beginnings of the tarot deck started in the 15th century in Italy between 1420 and 1440. There is no substantial evidence linking the tarot at that time to ancient Egypt although certain Egyptian symbols are present on the cards. But, we can to take account the history between Rome and Egypt in deciding how much Egyptian influenced these cards actually contain. This would be based on one’s historical perspective even if the jury in some cases are decided that there is no proof of such a relationship.

Created as a game for the nobles; the 22 cards we refer to as the “Major Arcana” was a lavish hand painted set of cards for the Italian nobility to entertain themselves with. This is not the same deck of cards we know today as playing cards which date back to the Chinese and the 12th century. Those cards were created at that time to entertain the Chinese King’s concubines. This origin of playing cards is a credible story as to the creation of cards because the Chinese also created paper which the cards were made of.

The three decks from the Italian Nobility in 1440 called the Visconti Trumps are the ones by historical consensus that are regarded as the ancient elders of the Tarot as we know them today. Like all playing cards at the time these early decks had number cards 1 to 10 in 4 suits and the court cards page, knight, queen, king and 22 cards not belonging to any suit. These cards bore symbolic pictures with subjects like the Pope, the Emperor, The Wheel of Fortune, The Devil and the Moon. We recognize these same names in the Major Arcana portion of the tarot decks we use today.

The tarot cards were used to play a new card game at that time called “Triumphs”. It was similar to bridge with the 22 cards without suits serving as the “trump” cards. The trump cards out ranked the other cards in the deck.  This card game was extremely popular among the ruling and upper classes in Italy; spreading quickly through Northern Italy to the East of France. As the card game spread to other countries in Europe changes were made to the pictures as the ranking of the trump cards which bore no numbers. As time ensued the card game spread to Northern Sicily, Austria, Germany and the lower   geographically countries.

There is evidence however that in the 16th century the tarot was used to compose poems in which personality characteristic descriptions were taken from the tarot. Poets would use the titles of the trump cards to create flattering verses to describe the ladies in the court.  In one specific case in 1572 a poem related to a person’s fate. It is noted that the use of the tarot cards for divination purposes dates back to 1750 where the divinatory meanings and uses of that deck was completely different as it is used today. Although in 1589 there was a case implying witchcraft and the use of the Tarot cards there is no other real written evidence of its occult use until the 18th century. It was not until really the 18th century that the tarot was viewed as having mystical and spiritual/occult meanings. But keep in mind that although it wasn’t the norm in terms of card usage; ordinary playing cards were associated with divination and the occult as far back as 1487. There is concrete evidence the early divinatory meanings were given to the tarot as far back as 1700’s in Bologna.

The first detailed reference of the Trump cards of the tarot was in a sermon. It was given by a Franciscan friar between 1450 and 1470 who states the Trumps were devised by the Devil himself. The use of the cards were condemned and the Devil is credited with the final triumph of the trumps. He contended that the Devil wins through the loss of souls in the card game.

The word “Tarot” is argued about whether or not it derived from Egypt, Hebrew or Latin as an anagram originally. Well, historical finds imply it comes from the first word “tarocchi” which is plural; or “tarocco” which is singular for the game of triumphs or trumps 100 years after the first deck emerged. No one really knows why the word tarot appeared but they do know the Germans called the deck tarok and the french tarot.

In terms of ancient historical association of the tarot and its history; Antoine Court de Gebelin in the 18th century in France became convinced that the tarot deck had a connection to Egypt based on its picture symbolism. In his book “Monde Primitif” he alluded to the fact that the pictures in the Tarot are from the ancient books that were not burned in Egypt. He also felt that there were secrets that had to be decoded in those pictures. Soon after everyone was viewing the tarot as a card system deep with hidden meanings.

The secret history of the tarot was again stirred up by the notion that the originator of the secrets was a god known as “Thoth” also called Hermes Tresmagistus. Modern occult tarot began in 1781 when the same swiss clergymen and Freemason Antoine Court de Gébelin, published a speculative study “Le Monde Primitif”, which included the religious symbolism of the tarot. He wrote that the symbolism of the Tarot de Marseille contained symbols representing Isis and Thoth. He further said that the word Tarot came from the Egyptian word “Tar” meaning royal and “Ro” meaning road. He concluded that the Tarot was meant as the royal road to wisdom. He also asserted that it was indeed the gypsies who were descendants from Egypt who used the cards for divination first and were the first as a nomadic group to introduce the cards to Europe. Although the later Egyptologists could not find anything to substantiate this it has remained solid as part of the Tarot legacy.

In 1781 the Comte de Mellet wrote a short article on tarot in published in Court de Gébelin’s Le Monde Primitif.  He was the first to write that there was a connection between Hebrew letters and the cards. In the 19 century the famous occultist Eliphas Levi developed a relationship between the Kabbalah and the Tarot. The Kabbalah is what is referred to as Hebrew mysticism. Now, this fueled the idea that the Tarot originated in Israel and contained the wisdom of the Tree of Life from the Kabbalah. This idea brought the 78 cards together into a uniform key to the mysteries and was passed on to the English speaking world through the Hermetic Order Of The Golden Dawn. The Theosophical Society, the Hermetic Order of the Golden Dawn, the Rosicrucians, the Church of Light, and the Builders of the Adytum (B.O.T.A.) all secured the Tarot’s position in the 19th and 20th centuries as a viable form of divination.

It was author Edward Waite who was accredited with the Renaissance of the Tarot in the 20th century. It was he who commissioned Pamela Coleman Smith to create what he called the “Rectified Tarot.” He, himself being a member of secret societies also collaborated with one of his brothers known as a revered mystic.  The man whose last name was Rider gave way with Waite to the Rider-Waite’s 1910 Tarot Deck. This deck has become the worldwide standard Tarot deck. It was and still is the most popular deck to date because of its rich symbolism and ease to interpret.