Why Ghosts Attack The Living & Why You Might Be At Risk 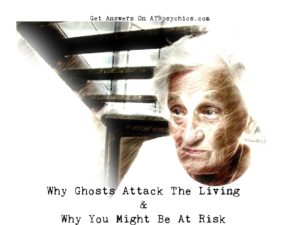 A long time back I read that ghosts cannot hurt the living. Many recorded cases over decades have demonstrated otherwise, including myself after I was scratched following a paranormal investigations. It can be traumatic and often life changing experience. Ghost attacks do occur and often times happen to those who never believed it ghosts – until it happens to them.

Why do ghost attack the living?

There are many reasons why an individual might be attacked by a ghost or attach to a person. What follows are a few reasons why a ghost will try to attack, what to look out for, and the best way to guard yourself or your loved ones from a mean vengeful spirit.

Why do Ghost Attack the Living?

Signs of a angry ghost episode

If someone assumes and maintains a higher spiritual perspective, their shield against phantom strikes is more powerful as a result of:

Lots of people will cringe in the idea of religion and prayer and yet, in times of assault and pressure from darker forces, I have observed many turn to prayer that never had before. I do, however, have a solid link with Archangel Michael.
“Holy Michael, the Archangel, defend us in battle. Be our safeguard contrary to the wickedness and snares of the devil. May God rebuke him, we humbly pray; and do you, O Prince of the heavenly host, by the power of God cast into hell Satan and all the evil spirits who wander through the world seeking the ruin of souls..