Why Are Some Zodiac Signs Compatible and Some Aren’t?

One of the uses for astrology is to help determine who would be a good match for us and who would not. This can be determined using 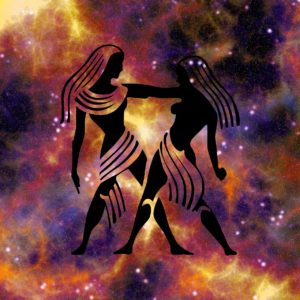 zodiac signs. Some signs are compatible with each other and some are not. Have you ever wondered why this is so, and what zodiac compatibility is based on?

It turns out that zodiac compatibility is based on Sacred Geometry. By dividing this circle into even parts, one can create certain shapes. These shapes each have meaning based on the number used to divide the circle. In this article, we will talk about the divisions of the circle and how they relate to compatibility.

The zodiac signs are derived by dividing the circle into 12 equal parts of 30° each. The first aspect is based on Unity or the number 1, and it is called the conjunction. In geometry, the conjunction is the point. In relationship astrology, a conjunction is when both people are natives of the same sign.

People with the same sign are generally compatible, but there are often difficulties based on the over-abundance of the energy of one sign. For example, two Aries natives will tend fight a lot and two Libra natives may have trouble because neither one of them wants to make a decision.

If you divide the circle in half, you get the aspect based on the number 2. This is the aspect of Polarity, and it is called the opposition. In geometry, the opposition is the line. The opposition is between signs that are 180° apart. Generally, the opposition is considered the most difficult aspect; however, it has a special significance when it comes to compatibility between people. There is an adage, “opposites attract,” and opposite signs gravitate towards each other and balance each other.

The next of the aspects is the division of the circle into three parts, which forms a triangle. This is the 120° angle, and the aspect based on it is the trine. The number 3 is a magical and divine number, and the trine is the easiest and most harmonious of the aspects. Signs that are in a trine relationship with each other get along very well. The only difficulty is that sometimes they get along too well, and they may lack the tension necessary for sexual chemistry that the harder aspects have.

The signs trine each other form groups of three that are all the same element. Below are the triplicities by element:

The number four is related to the cross and to the physical body. Because the physical body is subject to difficulties and hardships, four is considered a stressful number. If you divide a circle into 4 parts, you get a square, which is the name of the aspect formed by this division. A square is 90°. Signs that are square annoy each other. On the other hand, a square is a relationship, even if it is tense, and it is better than no relationship at all.

Although, the square is not considered a compatible aspect between people, the tension produced by it often results in sexual chemistry. These are the people who get under your skin, but you can not help but feel attracted to them. Each sign has two signs that are square to it. Below are the signs and their squares.

The next number that can divide a circle evenly is the number 6. The number 6 is 2×3, so it has the quality of both polarity and divinity. The division of the circle into 6 can yield either the hexagram, which is a star formed with two triangles, or the hexagon. The aspect that comes from the number 6 is 60° and is called the sextile.

Signs that are sextile each other are harmonious. They are not as harmonious as those that are trine, but they still get along quite well. These signs are generally compatible with each other, but the relationship could take on a friendly quality, rather than a romantic one. Each sign has two signs sextile it. The signs and their sextiles are:

The aspects listed above are known as the Ptolemaic aspects. Signs that do not form a Ptolemaic aspect with each other are considered averse. This means that they do not have anything in common with each other. In compatibility, it is generally better to have some aspect, even if it is tense, than to have none at all.

It is possible for people of averse signs to get together and having lasting relationships, but it takes more work and deliberate communication. These signs do not have any natural understanding for each other. Each sign has four signs that are averse to it, and these are listed below.

In conclusion, the relationship between zodiac signs is based on Sacred Geometry and the mystical meaning behind numbers. This is the reasons that some signs are compatible with each other and some are not.